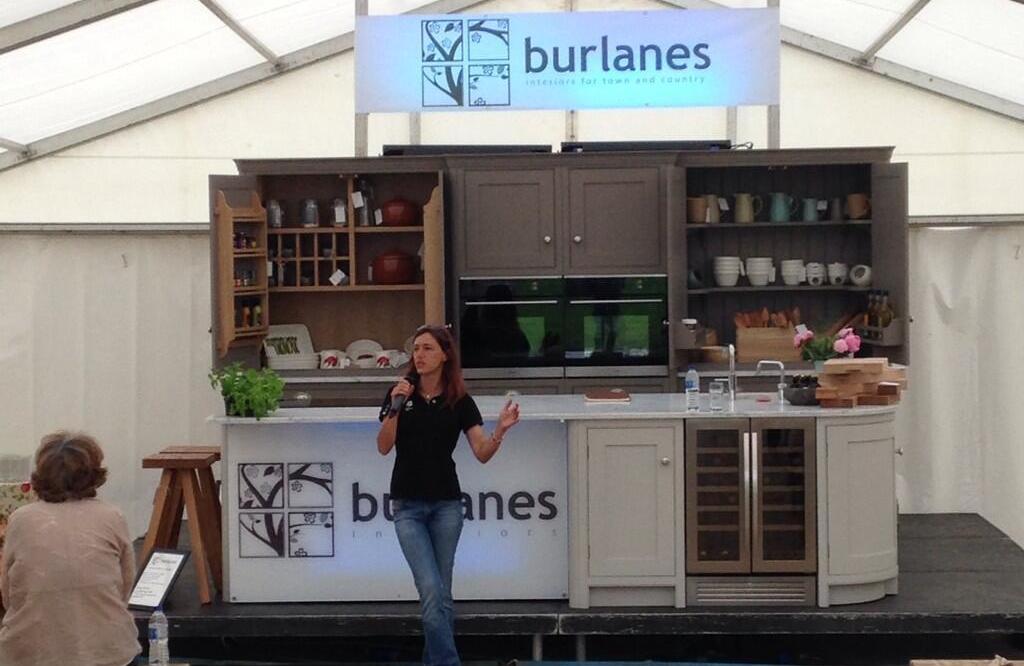 Here you will find, as I gradually move posts over, material that has been published before but I think is worthy of keeping. I hope you enjoy going through them…. 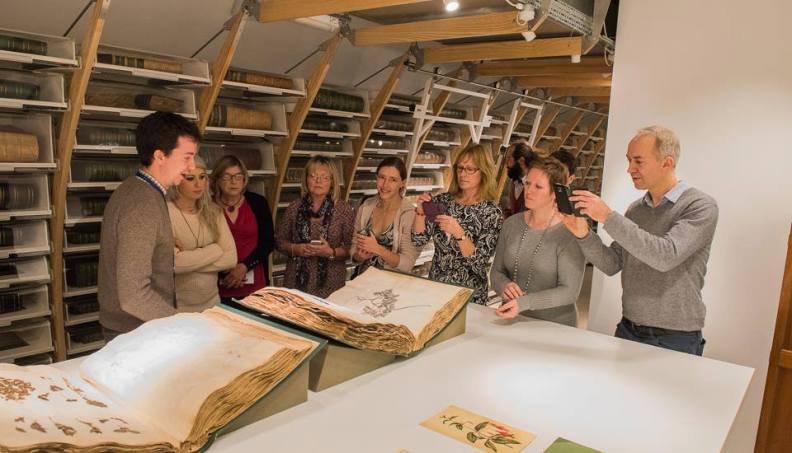 Wisteria – The importance of pruning

I have been in love with Wisterias for as long as I can remember, not just for the flowers, which are of course spectacular and beautifully fragrant but for their elegant shape and form. The sinewy trunks in the dead of winter create amazing abstract forms. Their leaves in the summer creating shadowy groves. For me there is also the added joy of pruning and training them.

The Wisteria genus includes 10 species of woody climbers belonging to the Legume family.
Closely related to Callerya, which can be found in various forms of tree and vine around the world and Afgekia, a climbing shrubby vine, native to Asia is significant as they all present 8 chromosomes. This means (from what I can understand, so I may be entirely wrong in this!) that they have significantly less chromasome variations than other members of the Millettieae tribe (a subdivision of the Legume family) to which they are related. As an example we have 46 chromosomes, a rice plant has 24, a Nepenthes rafflesiana has 156 whilst the Morus nigra has an ENORMOUS 308 x 22( the chromosome number is docosaploid, or 22 times the basic number.)
Anyway! Enough of the science! 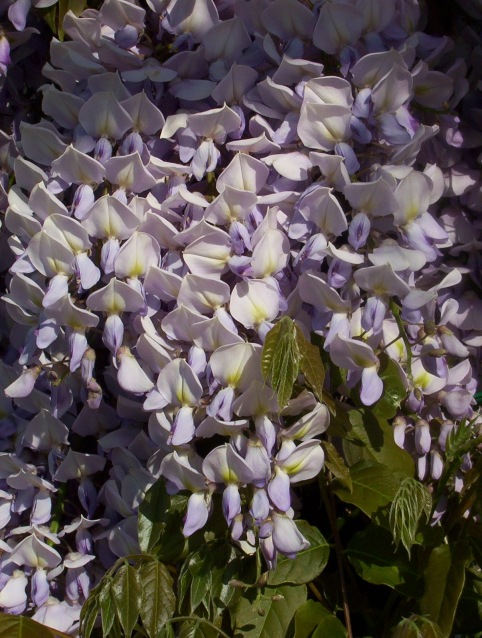 Supposedly it was named after Dr.Caspar Wistar (physician) but there is also evidence in its spelling to suggest it was actually named after, the botanist responsible, Thomas Nuttall‘s friend Charles Jones Wister. The truth of this may never be known and as the name has been so long established botanically speaking it is doubtful it will ever be changed in its spelling.

Wisteria venusta – Silky Wisteria, also from China, I have seen it said that this is a variant of brachybotrys?Wisteria frutescens – American Wisteria
Wisteria macrostachya  – Kentucky Wisteria

For the purposes of this post though I shall concentrate on W. sinensis & w. floribunda
The Wisteria is one of the stars of the spring show which has become now an integral part of the English country garden. The oldest growing Wisteria sinensis in England dates back to 1816 and was planted outside the Head Brewers cottage of the Fullers brewery in Chiswick. They are rightly incredibly proud of it & if you want to see it a tour of their brewery is available. There is also an amazing example of the sinensis that is approx 252ft long & 13ft high! It belongs to a lovely lady down in Essex that opens her garden for charity, it takes her approx 2 weeks to prune this monster in the dead of winter, a true labour of love as the frost often catches the blooms and damages them, ruining the display.
w. floribunda was introduced slightly later around 1830. Due to the nature of Japan up until 1859 it was closed to foriegners and only a very limited number of westerners were even aware of the flora of Japan.
Oddly Wisteria frutescens was the first of these cousins to be introduced to the UK around 1724 but never had the widespread appeal of the asiatic varieties due to its smaller flowers and its gentler scent.
By the late 1800’s though Wisterias had fully established themselves as stalwats of the “British” garden.

Depending on where you are in the UK the flowering period can be as early as late April and can continue into early June in the more northerly parts.

Sometimes you will see some giving out a second flush which although pretty always indicates to me a badly pruned Wisteria and pruning is massively important for this plant to give that amazing performance we associate with it.
I remember hearing a visitor to the garden I was working in a number of years ago telling her friend an interesting tidbit of information about the difference between W. sinensis & w. floribunda, my brain squirreled this away in its avaricious fashion. She had been asked how to tell the difference between the two and it was amazingly simple!

I of course immeadiately went to check this out!
The garden I worked in had over 30 different Wisteria, some even trained into standards, although non were in flower at that time, sure enough this lovely lady was correct the stems did twine in the directions she had stated.

There are as many theories regarding pruning as I have fingers and toes but at the start of my career I was given a piece of advice which has stuck with me.

It works, heres one I pruned earlier….

Longest cut in this case refers to five buds & shortest to two.
But why cut flowers off I hear you cry!
For several very good reasons I cry back!

For the sake of argument lets say you have an estabished plant.
Choose your leader, this is the main stem growing in the direction you want it to continue in, the one growing closest to horizontal is always a good bet as it has less apical dominance and will grow slower and produce more sideshoots which is where your flowers will appear.
For its winter prune you will reduce it to a third of its summer prunes growth.
Then working your way back along the stem reduce the sideshoots.
By reducing each sideshoot to 2 buds you limit the plants capacity to flower forcing it to put all its energy into those 2 beautiful buds. This will give you bigger, better flowers that won’t exhaust the plant allowing it to recover quicker after flowering.

This also encourages continuity in flowering displays, your plant is less likely to give a biennial performance, amazing one year, pretty sad the next.

It works on the same principles as fruit pruning, the more horizontal the stem the more fruiting side shoots it produces, this means more flowers.
This can be applied to ANY flowering tree/shrub/vine.

The above rules do assume you are faced with a vine that has already been trained in with a good framework though. I come across a lot that havent.
I see young plants that have been, through ignorance of pruning regimes, allowed to go insane, rampant growth with no structure running amuck up houses, through fences, up trees. A terrifying prospect when you consider a happy wisteria can easily put on 10ft in a year, sometimes more. Plants that have been given no permanent structure to be tied into, wrapping themselves around drainpipes, gutters and through eaves, that will given a short amount of time pull a house apart!
Ive hung out of windows carefully extracting growth from delicate telephone wires, hung off ladders trying to gently coax an errant offshoot out of someones loft before it takes up permanent residence.

When you plant a wisteria the very first thing you should do before you even pick up a spade is put in the wires that will support its growth for what potentially could be the next 200 years.
The next immeadiately after planting is untie everything it came tied to. Throw the bits of plasic, wire & bamboo away and buy a good ball of 3 ply string and train your new prized possession as horizontally as you can manage, if you can tie it in using a serpentine fashion even better! A plant will always want to grow vertically, we are asking it to go horizontal because if we didnt within 2 years it would be in the rafters and we’d like to be able to see and smell the flowers. Not to mention seeing out of the windows as an added bonus…
Im going to stress this next part, only tie the vine to the wire with string.

NEVER wind it around the wire
NEVER use wire to tie a plant in, I will ugly cry at you and nobody wants that!

Using your lovely 3ply string, which will rot through in a season tie it loosely to the wire in a figure of 8 and for the sake of aesthetics if we can put the knot behind the wire i’ll be a very happy bunny.
oh! and please, please PLEASE! Never allow a shoot to do this – see pic. below.
This poor baby is only 2 years old but next year im going to have to cut him off entirely before he cuts off his own circulation and gets sick.

Another of my bugbears is when you get 2 climbers, for example a Wisteria & a Clematis or a rose & Clematis, planted to grow together. Yes it will look pretty…. for the first few years but you’re buying trouble. Often they have 2 entirely different pruning regimes which causes absolute havoc and is incredibly daunting for the less experienced gardener.
This example, a Wisteria and a Clematis montana (pruning group 1) had been left unchecked for about 5 years. Small amounts had been cut off when they encroached on either the gates or interfered with pedestrians outside but no structure had been put in place for the Wisteria and the Clematis…. well… hmm…

Tackling this brute now will mean sacrificing the coming springs flowers on the montana but given how vigorous they are it will be a small sacrifice to make with the benefits for both plants far outweighing the harsh haircut i’m going to be giving them both.

First stop, removing all the errant strands climbing the fence and Magnolia.
Second removing anything dead, diseased or dying.
Third, sorting out which ones I wants to keep as a famework and cutting the sideshoots back.

The 2 pics below show the length the the sideshoots were cut back to. Year 1 is where I pruned it back to and caused it to put out flowering sideshoots in the summer. Year 2 is where it was pruned to the year previous and so on. You can see why the winter prune as well as a proper summer prune is so important in these 2 pics as the total length over 6 years is quite significant and there is a lot of bare stem with no sideshoots producing flowers.
In this case I have pruned back to the main stem of 6 years ago in order to trigger it to resprout further back and give me new juvenile material to work with next year. 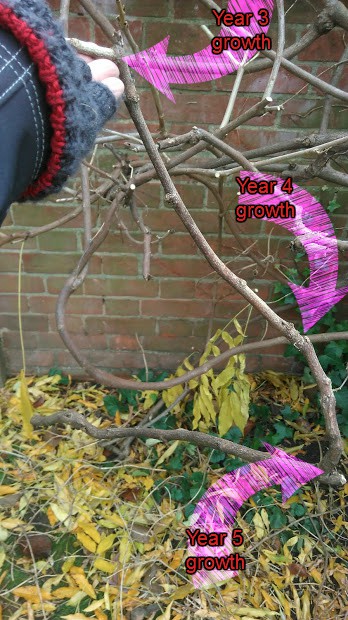 I then put in a wire to run along the brickwork at the base of the fence, in future years I will add further wires to the fence but that can wait until a good framework is re-established

This example is still work in progress, another 10ft of tangled mess is on the other side of this wall. At least I can see whats happening now…

This is another im going to be pruning soon

If your Wisteria is refusing to flower bad pruning could be the reaon and now is the time to think about rectifying it. The window of opportunity is a relatively long one so if your not out with your secatuers on the 21st of December dont fret. The winter prune can occur pretty much anytime once your vine is dormant. I wouldnt leave it past February though as the sap will be starting to rise by then.
A couple more random facts!
Shoots emerging from the very base of your plant should be pulled off (dont cut), these are most likely from your grafted rootstock and whilst vigorous will not be as floriferous as the Wisteria you have selected and over time will become the most dominant.

It can take a Wisteria seedling up to 20 years to flower so when buying make sure the plant is in flower. This takes any doubt out of its colour and ability to perform.

Lastly, enjoy your Wisteria, its an investment in the future, for your children, grandchildren, theirs and for generations to come. Gardening is telling the children of the future you loved them enough to make sure the world had beautiful things for them…