I’m writing this as I sit on my dad’s sofa, he’s opening a bottle of prosecco I got him for his birthday and it’s my first attempt at blogging from my phone. This could get messy…

We’ve talked about visiting Alnwick for years together, mum & dad visited shortly after the Grand Cascade was first opened in 2001 but today was my first visit! For those in the know Alnwick is pronounced Annik…apparently…anyway!

On our approach along the A1 there was a moment of horror as we saw a sign telling us the opening wasn’t till the end of March (which sent me off into gales of laughter & my dad saying frantically “I checked the website!”) But that referred to the castle not the gardens. We also decided to turn up on a day when they were holding another event so there were hundreds of people trooping along the country lane approaching Alnwick but it did mean we got to park in the priority car park.. bonus!

Admission is very cheap by comparison to other gardens, mentioning no names, that have far inferior facilities but that’s in my hugely over inflated opinion.

The jaw dropping entrance to the garden is dominated by the much vaunted Grand Cascade and wow! The scale is amazing, it has echoes of some of the finer Italian gardens in its sheer scale but with wonderfully modern clean lines. Designed by Wirtz international it encapsulates the Duchess’s vision for the garden & what a vision.

It’s shape is echoed in the incredibly sculpted yew and beech hedges which climb to the summit where the ornamental walled garden is hidden away. We were booked on a tour of the poison garden, something which I’m very excited about…. I realise how odd this sounds but as a gardener there are so many wonderful plants we encounter on a daily basis that are considered toxic that to rule them out would be to almost ruin our gardens!

First though we had a while to explore! So we headed to the bamboo Grove.

I of course being a complete child immediately ran off down this labrynth of shady tunnels giggling madly & hiding from dad, then running back up behind him like some kind of mischievous bamboo elf! Great fun!

There are various exits located around this amazing maze and after dad was completely lost we exited and made our way over to the entrance to the poison garden. Now I’m not going to talk in depth about it this time, it deserves a blog in its own right but suffice to say our tour guide Jamie was excellent & very helpful, informative & patient with all my questions (Thank you Jamie!)

There is a wonderful bank of snowdrops, Scots pines & silver birch as you head towards the cherry orchard on leaving the poison garden. With an amusing owl & pussycat eternally sailing the lake to your left. Then you reach some fabulous mature dawn redwoods. A reminder for dad & I of a trip to Heligan where we argued about whether the giant tree in the distance was a redwood. It was…

Wandering through we came across a sword firmly embedded in a stone. So of course we both had a go at being Arthur…

Neither of us will be laying our claim to the crown & the sword is still firmly embedded.

Next came the cherry orchard which sometime around late April, May will be absolutely blissful! There are swing seats between the trees which will be incredibly gorgeous to be on as the petals fill the air and the bees create a melody around you *happy sigh*

As you travel through the garden there are many amusing little statues hidden away from the lion to humpty dumpty to cinderellas pumpkin.

As you reach the pinnacle of the hill you are once again presented with a fabulous water feature, I can imagine on a hot summers day how this would cool the air. Inviting visitors to paddle and play with the swiftly flowing water.

This rill emenates from a beautiful pool in the centre of the walled garden where the water bubbles continuously to the suface. Framed beautifully by the ornate gates at the entrance, it invites you to explore what is a very large area. One thing that strikes you over and again with Alnwick is the attention to detail. The construction of the different elements of the garden, the permanent structures is so well thought out. The attention given to what it will look like in winter, one of the most difficult times for a gardener in some ways, is incredible! 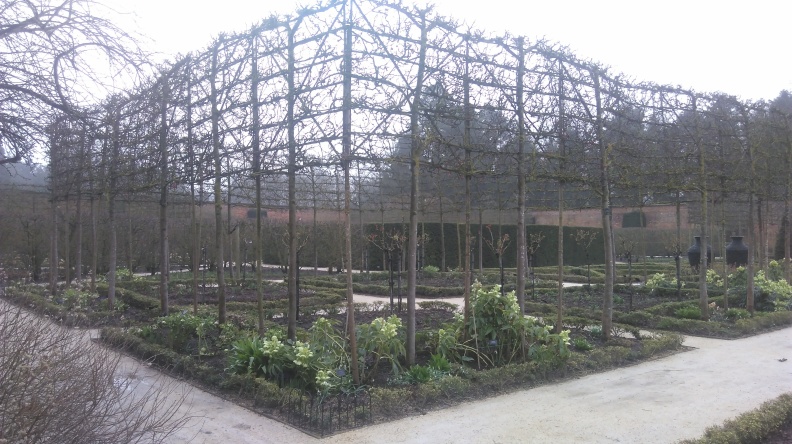 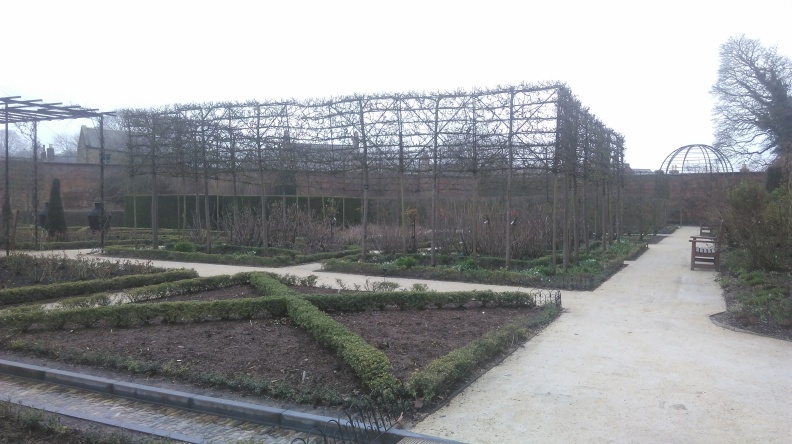 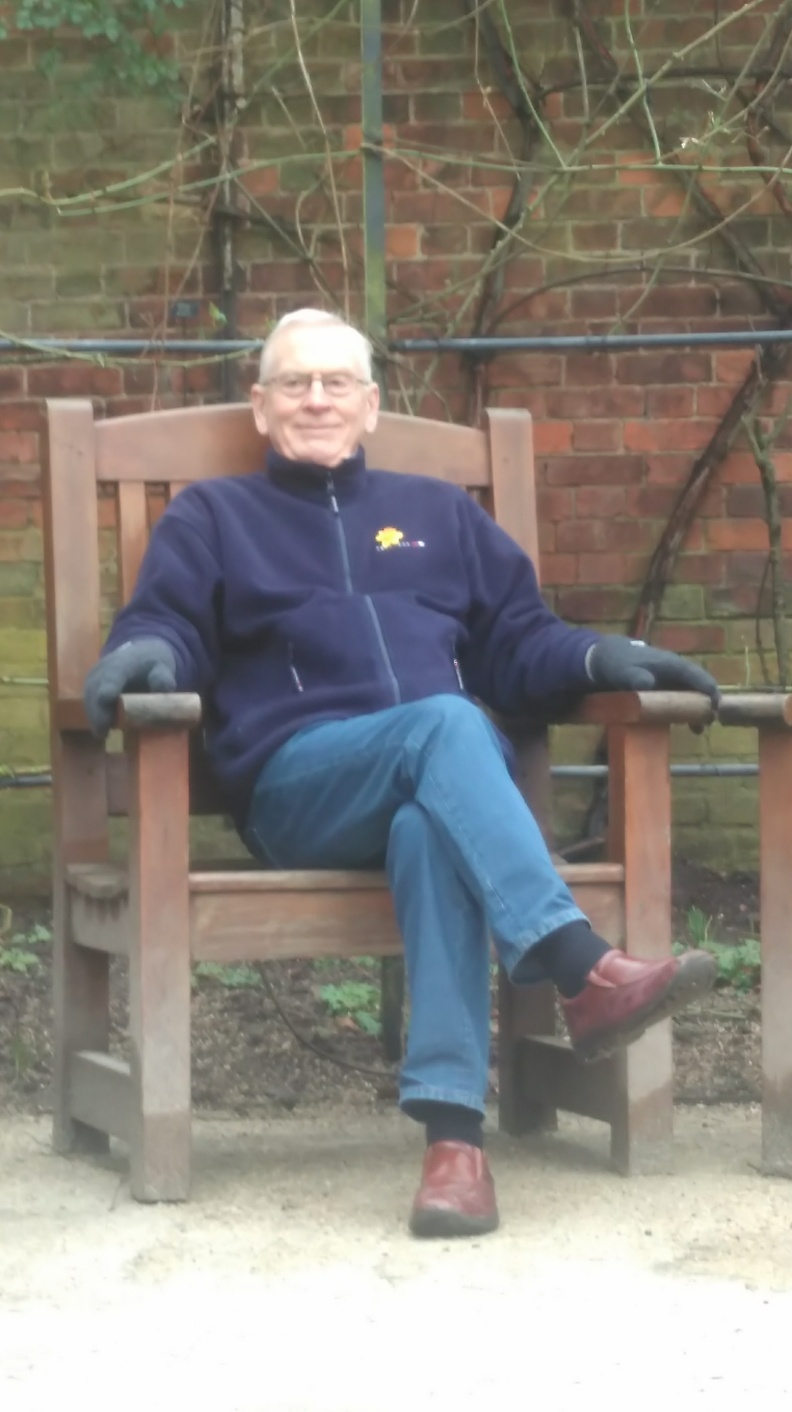 We lingered a long time in the ornamental garden, its sheltered climate home to some lovely Camellias which ive never seen planted this far north. The iris’s & Snowdrops flowering merrily away. The Wisterias on the centre pergola promising a spectacular display in a very short time. The scent of the Chimonanthes beguiling us further to stay. 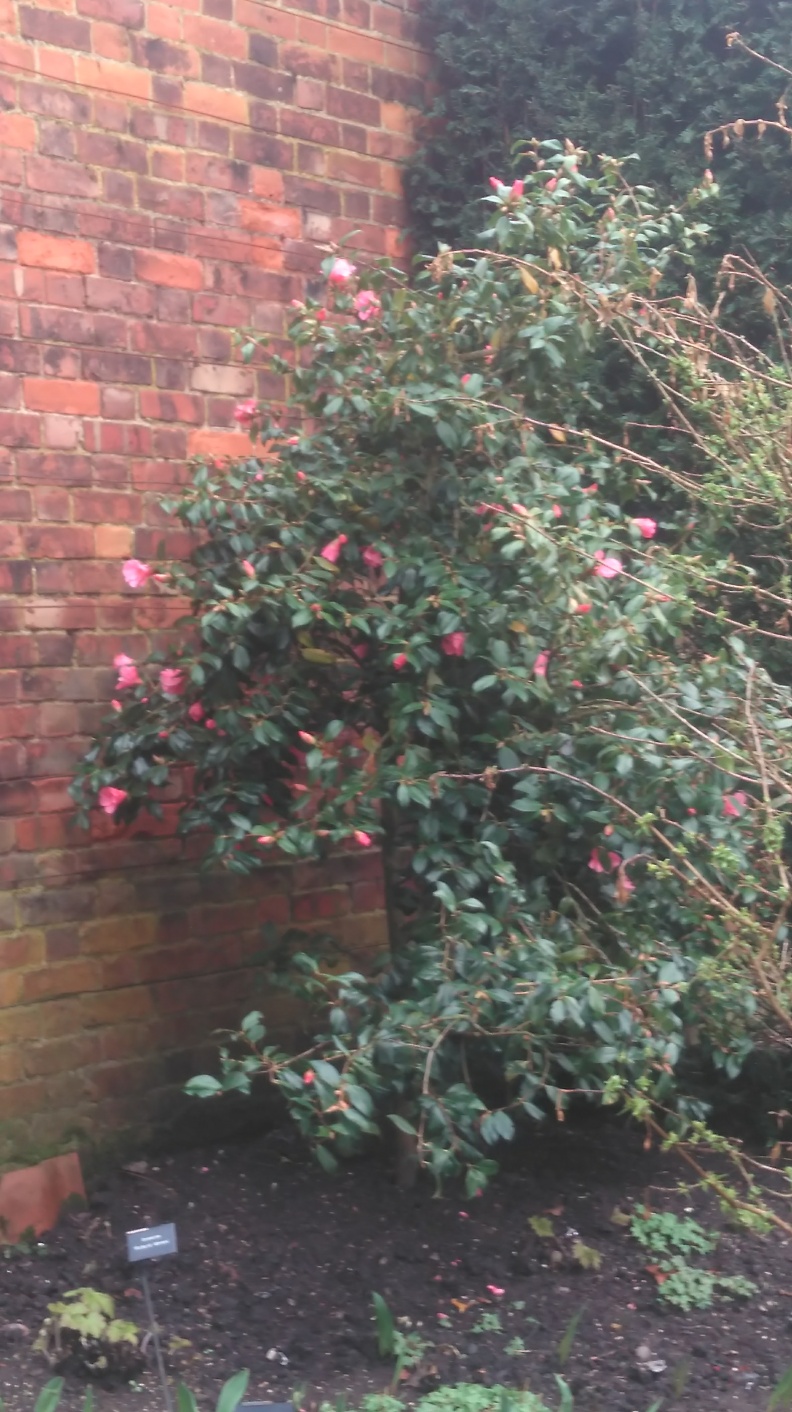 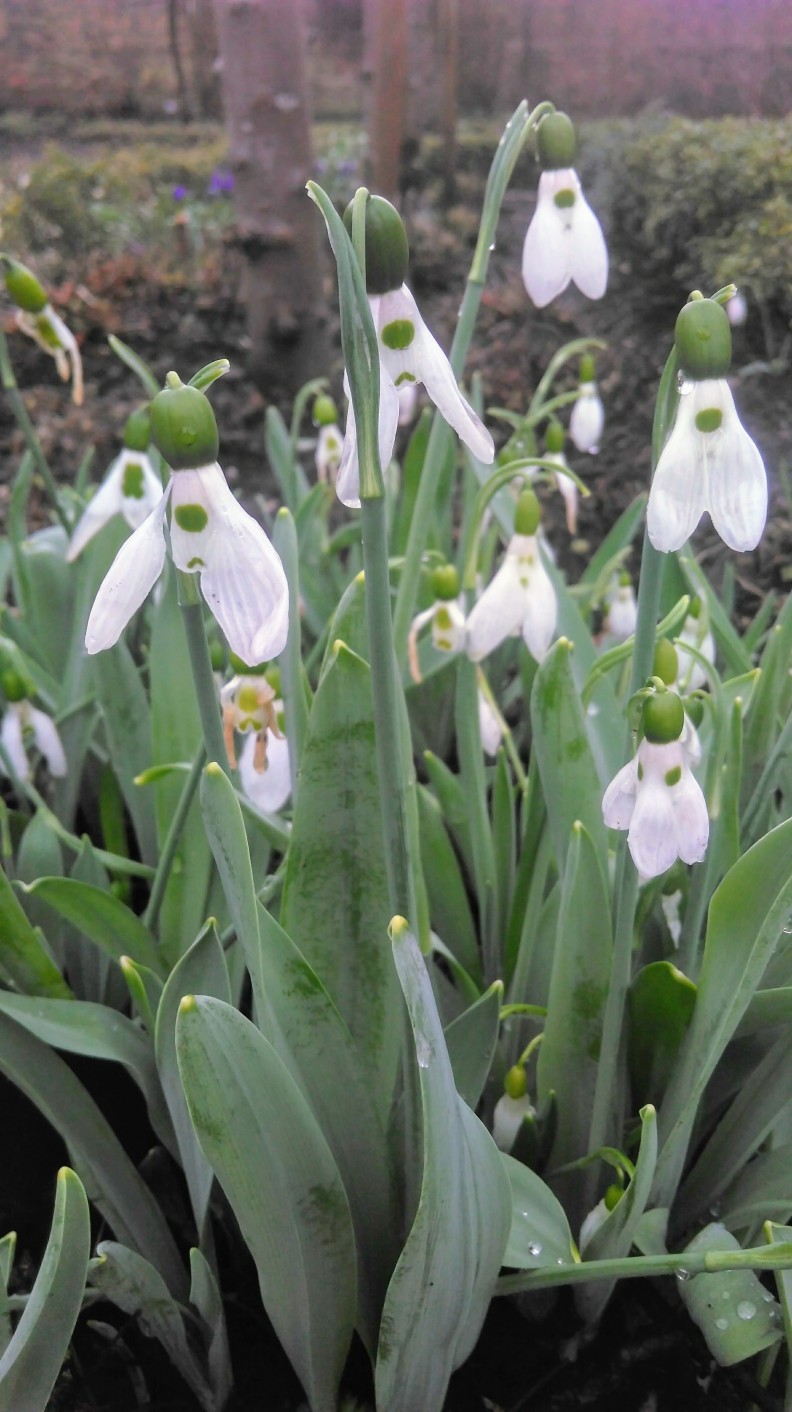 The rose pruning is particularly spectacular, everything from intricate towers, arches & wall trained and the labelling is to die for! Accurate and plentiful, I love a good label!

At this point Dad and I started to feel the need for a fortifying cake and coffee. So we started to make our way down the Grand Cascade, it really is spectacular. The sound of rushing water is simultaniously overwhelming and calming. 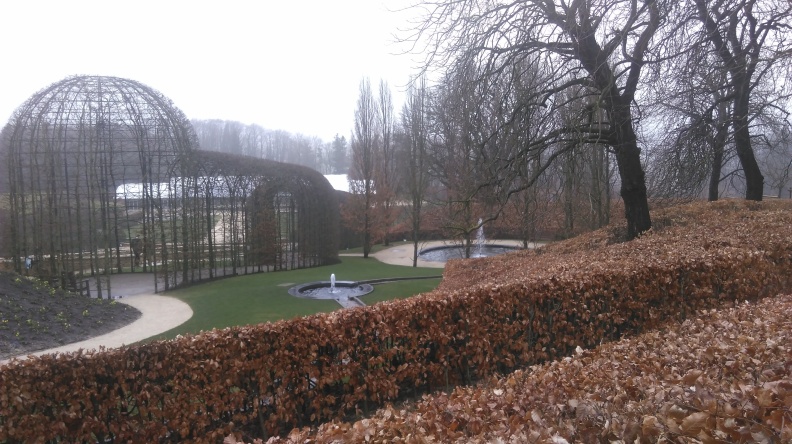 Dad didnt really get it when I told him I was going to film and in his excitement at the feat of engineering that the pumping of hundereds of gallons of water involves kept chatting so you get the pleasure of hearing my dad! I can certainly think of worse things!

Having partaken of the wonderful spread in the Pavillion cafe and feeling a bit more bouncy once more we set out to cover the rest of the garden befor closing time. Having already played in the Bamboo maze we headed straight for the Rose garden. Now admittedly a rose garden is not at its most spectacular (to most people) in March it is worth seeing the bare bones of the structure.

The hours of pruning this must take! 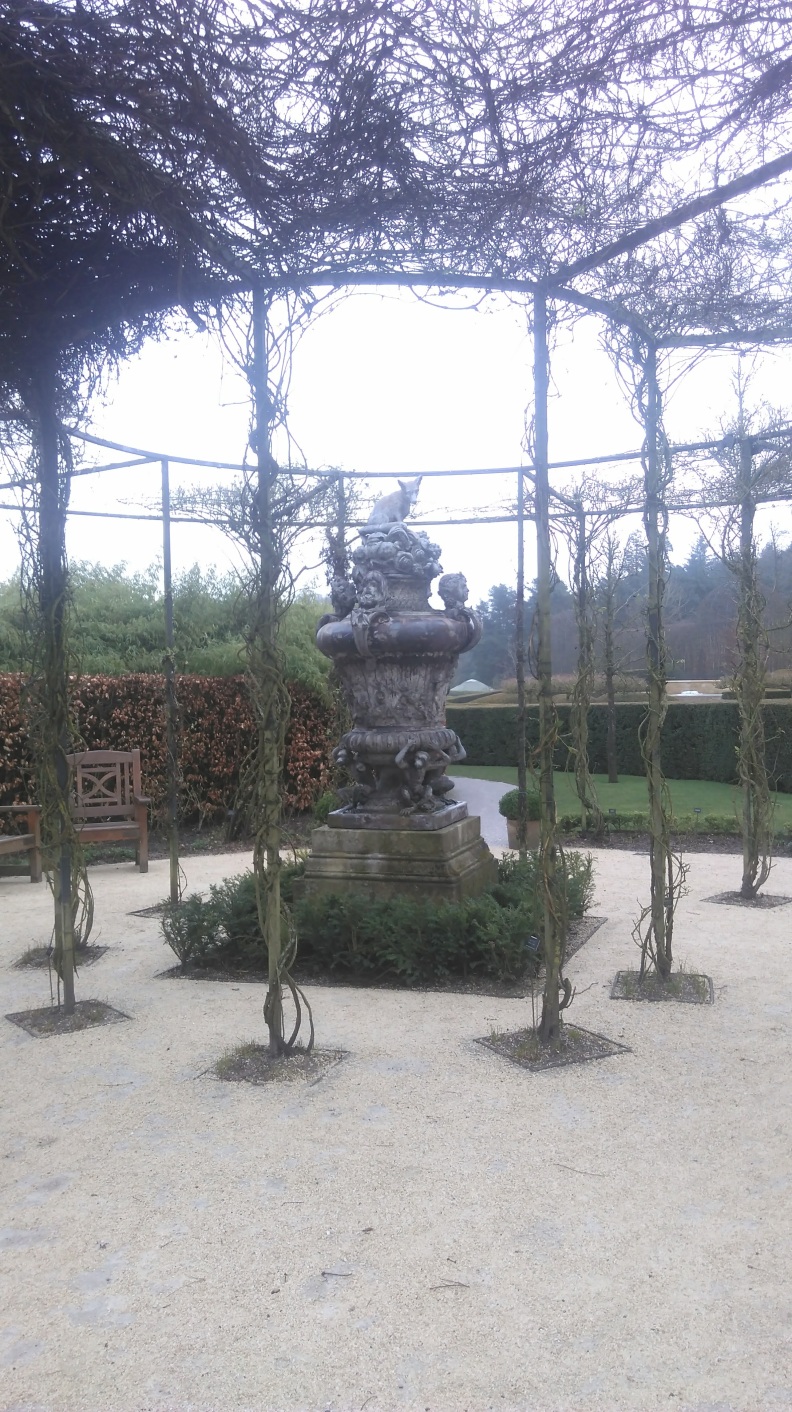 Once again its the attention to detail which strikes you as you wander through the garden, the gorgeous gateway with its incredible craftsmanship struck me particularly. Maybe because it reminded me of the jewellery i used to create in my previous incarnation as a jeweller. Metal working and gardens so often seem to go hand in hand curiously. I know many gardeners who dabble in jewellery and metalsmithing and vice versa, perhaps its the creative nature of them, the wish to bring beauty to the world? 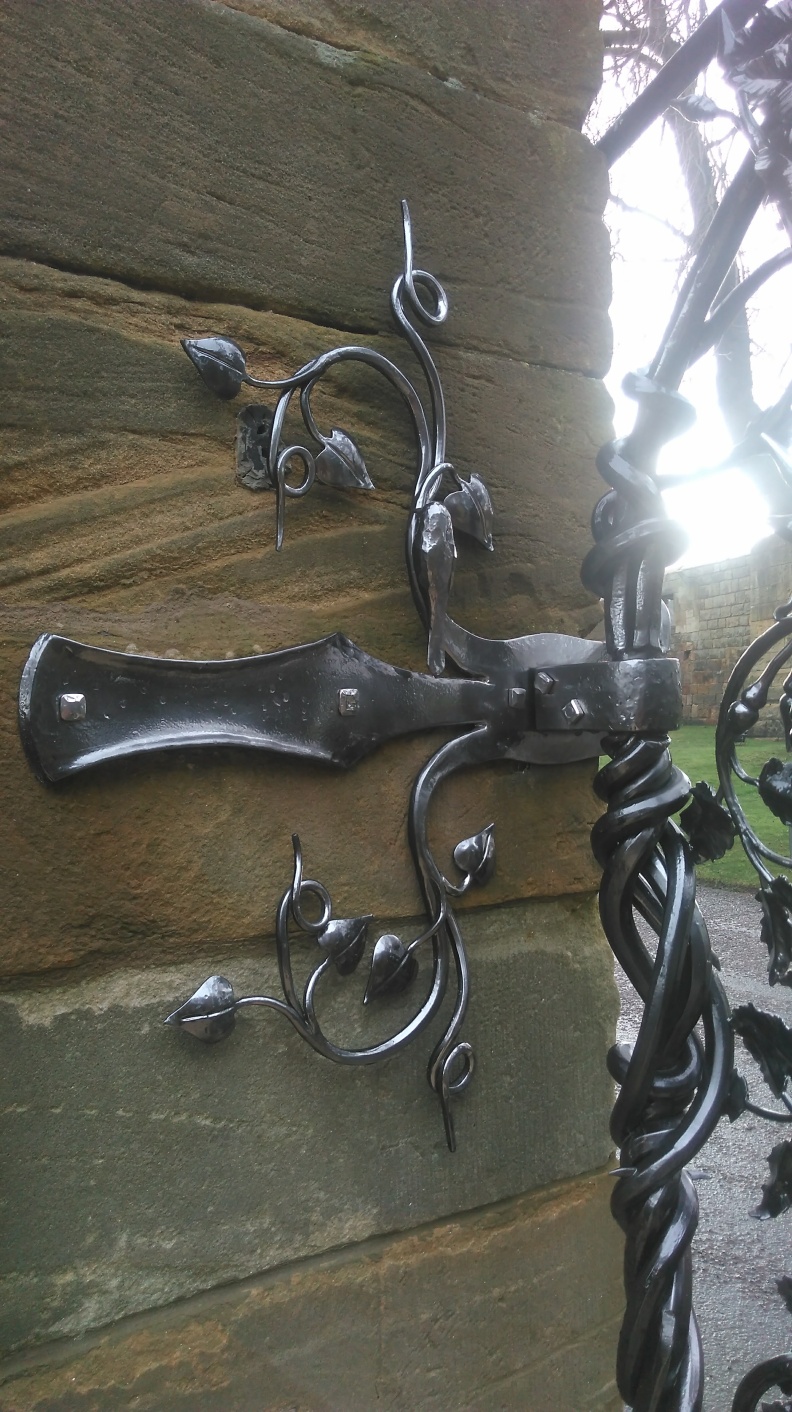 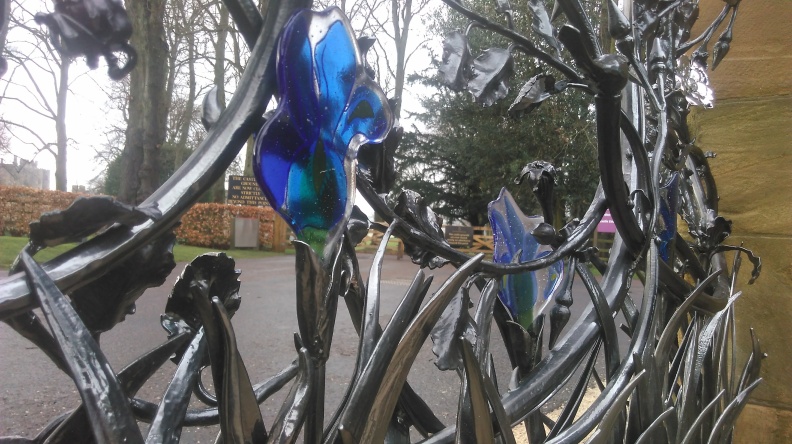 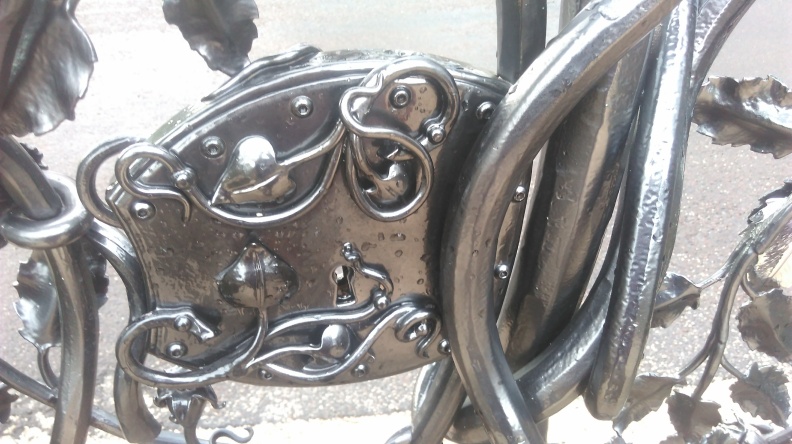 Whatever the reason, inspiration behind this amazing crossover of skills I for one am a great advocate and lover of metal smithing in garden settings.

The hedges at Alnwick, incredible, amazing! Often overlooked in their importance in a garden setting, hedges have a multitude of functions. Creating structure throughout the year, giving form and shape, a backdrop for the plants to perform against and seperating various areas. All of my favourite gardens have one thing in common. Great hedging!

When considering the layout of a new garden this is the very first step  and here they have it just right!

I cant wait to return to Alnwick with my proper fancy camera in the summer to capture how amazing I imagine it will be! 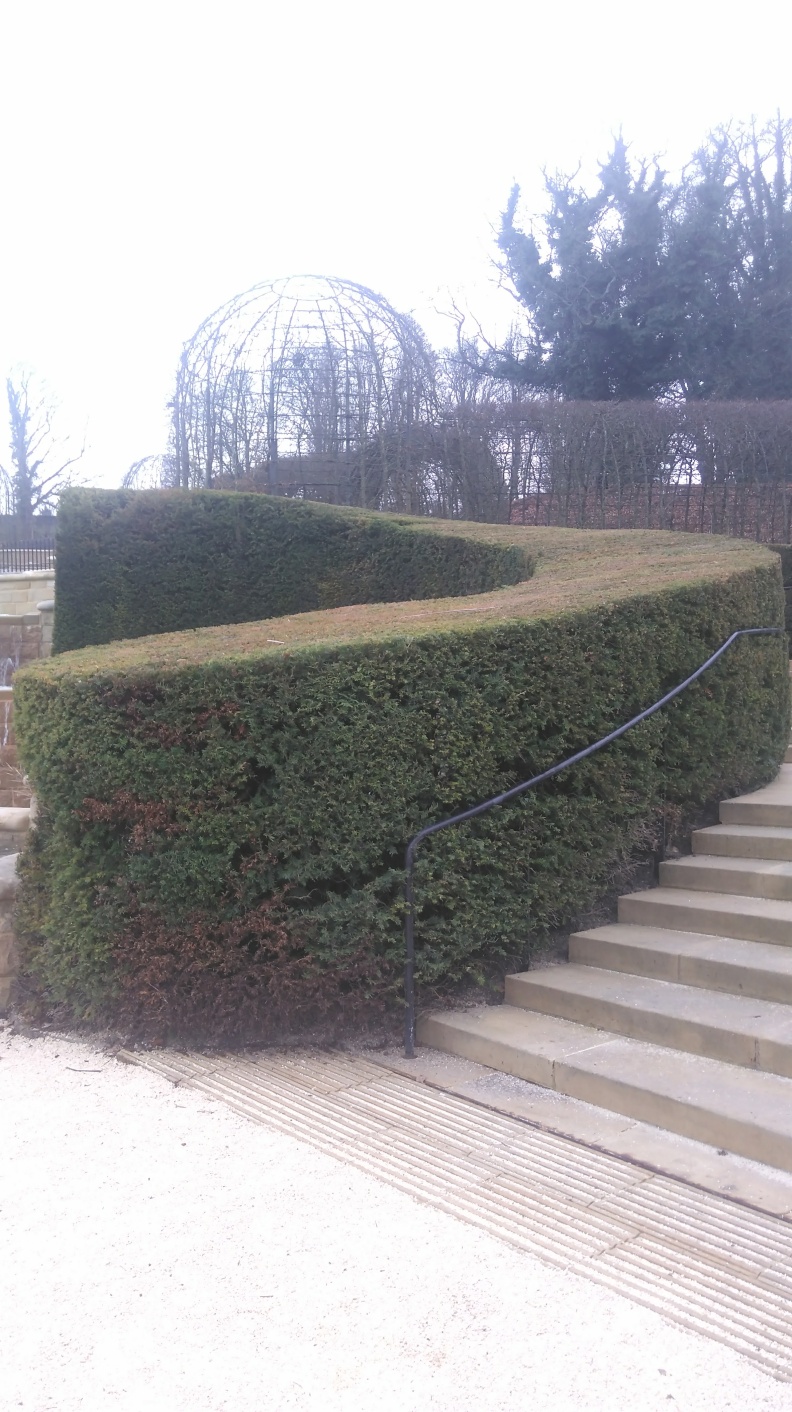